Out of all the Latin American countries, most abortion is illegal and criminalised. It is illegal in Peru, Ecuador, Brazil, Chile and Venezuela. It is only legal in three countries. Those being Colombia, Argentina and Mexico. However, in some countries, it is illegal that women can seek legal abortions under very restrictive conditions.

The three main conditions are basically the same in all the countries in which abortion is illegal. One of the main conditions is if the woman’s life is in danger, that is the case in Peru, Ecuador, and Chile the main law changed in 2017 in which women could have a legal abortion if their health was at risk. In Brazil, it is also if the women’s life is at risk, the same as in Venezuela whose law was updated in 2000 after it is illegal in all cases since 1926. In Chile’s updated law of 2017, it is also if the women’s life is at risk. The seconds of chiles three conditions in 2017 is if there was a fetal anomaly. Another condition in place in most countries is the case of rape. It is in place in Ecuador since April 2021, also in Brazil, it is in case of rape or incest. It is the final of the three conditions in Chile, but it has to be confirmed by a social worker, psychiatrist or psychologist. If it is rape there is also a limit to 12 weeks after for women over 14 and 14  weeks for women under 14.

Those conditions are highly unfair and restrictive. Which is an objection to women’s rights over their health and bodies. Even though abortions are technically legal in most countries because of these restrictions it is not their body their choice which is what pro-choice activists are trying to achieve. This leads women who don’t meet the conditions to seek illegal abortions. This applies to most women who want to terminate an unwanted pregnancy. However illegal abortions are highly unsafe and can result in severe complications or maternal mortality. 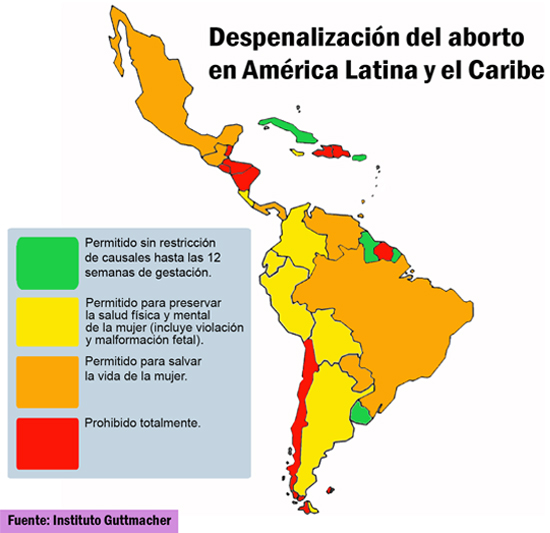 In most those countries the unsafe abortions are infact ilegal and can result in prosecution. In Peru the conviction would be 2 years in jail for women and 4 years in jail for whoever performs it. If a woman faces complications from an unsafe abortion and goes to a health center the medical proffesionals have to report her to the police. If they don’t then they risk being prosecuted as well. In those cases it overrides the doctor’s oath to confidentiality. There is the same case in

In most of those countries, unsafe abortions are in fact illegal and can result in prosecution. In Peru, the conviction would be 2 years in jail for women and 4 years in jail for whoever performs it. If a woman faces complications from unsafe abortion and goes to a health centre the medical professionals have to report her to the police. If they don’t then they risk being prosecuted as well. In those cases, it overrides the doctor’s oath to confidentiality. There is the same case in Ecuador, where a woman seeking abortion gets a violation of their confidentiality. It also criminalises women that have miscarried. And seek post-abortion or post-miscarriage care. There is a punishment of two years in jail for women seeking abortions and three years for the medical professionals providing it, defendants might also be convicted. The same happens in brazil and Venezuela where there is prosecution for women who have illegal abortions or the doctors providing them.

Abortion is historically considered a crime in most Latin American countries, it dates back to the first laws in the 19th and 20th centuries.  In Peru, the right to perform therapeutic abortions was legalised in 1924 but the protocols were just put in place in 2014. In brazil In 1890 abortion was criminalized under all circumstances. In 1940 the requirements were enforced resulting in the conditions put in place. A law in 1979 prohibits any object or substance that may cause an abortion. In Argentina In 1880 abortion was illegal under all circumstances In 1922 the law changed to the same 3 conditions. In the dictatorship from 1976-83, the law was restricted further. In 1984 the law was returned to 1922. Then to be legalised in 2020. In Venezuela abortion was criminalized under all circumstances in 1926. In Chile, There was a law in 1931 that allowed legal abortion but it was banned in 1989. In the early 20 century, the fight for abortion involved a feminist movement for women’s control of their own bodies and the medical community because of poverty and child mortality. In 1936 a group of physicians requested to legalize abortion completely for socioeconomic reasons but the request was denied. The movement Emancipación de la Mujer Chilena founded in 1935 promoted women’s control over their bodies from the beginning. It has been associated with the Chilean Association for the Protection of the Family since 1967, to combat women’s mortality from an illegal abortion. In 1973 in the Barros Lucas hospital in Santiago, a group of gynaecologists carried out 3,000 abortions to lower class women with unwanted pregnancies with a high risk to die.

After, throughout the 21st century, there were many attempts tried and failed to legalize abortion in most countries. In Ecuador, as of 2019 the last time that they had debated abortion was in 2013 and it was denied. In Brazil In 2004 bills were presented to Congress to expand the limits. Brazilian women launched a campaign in 2005 to legalize abortion. In Colombia, Since 2006 they had a

law that abortion was only legal under the same conditions, and it caused women to seek illegal dangerous abortions. But that law was changed and in 2022 it was legalised under all circumstances. In Argentina, a law was passed in 2002 to advance women’s health but it did not include anything about abortions. In Chile between 2000 and 2012, 11 bills were presented to the senate, 3 of them were in 2012 and all of them were rejected. In 2010 an abortion hotline was launched to help women seeking abortions. In 2014 Michelle Bachelet became president and for the first time since 1931 chile was ready to legalise abortion. Also in 2014, there were two sides of activists in the coalition of La Mesa,  some considered it to be good and it would decriminalize abortion others found it restrictive and that it wouldn’t fight for women’s right to choose. La Mesa did approve the bill as long as it promoted more rights for women to choose. In 2015 the president presented the bill and it took 2 and a half years of debate in Congress to make a decision. During the period of debate, it was highly discussed in the catholic university looking for a way to ban it. The original bill was changed by congress. If there was a woman who had an illegal abortion and sought help for complications the medical professional had to report the woman, that was not in the original bill. The original bill involved the confidentiality of those involved, the final one didn’t. In march 2018 Chile switched governments to a government that opposed the law and tried to prevent it. There were many trial and error attempts in the 21st century until now.

The legalisation of abortion faces many obstacles in society. In Peru, the highly religious society creates many obstacles. There are also many anti-abortion organizations in politics and online platforms.  Most anti-abortion online websites require personal information. The greatest risk is that if they have personal information of women seeking an abortion is that they can later harass them. One of the main organisations of pro-lifers is The Alianza Latinoamericana para la Familia (ALAFA), there is also The Population research institute (PRI) is responsible for many anti-abortion marches such as “con mis hijos no te metas”, there is also Opus Dei is an organisation founded in the church. In Ecuador, most women seeking an abortion that were prosecuted were women that were indigenous or afro-descendants living in poverty that was discriminated against by society. In chile and most other countries, access to abortions can depend on the health care workers’ personal beliefs. There is a lack of training for medical professionals and the ones is given to certain doctors such as OBGYNs. OBs might not get the final say especially if other specialists get involved. Colombia has set a president in society and how it can change. The changed law follows years of women’s protest, their symbols are green handkerchiefs.

A big relation to abortions is modern contraceptives and the lack of accessibility. In Peru, modern contraceptives are legal but are not accessible to the lack of education and obstacles in religious and social beliefs. There are also many campaigns that spread ignorance about contraceptives and are an obstacle in expanding education. There is also a debate about whether the morning after pill counts as a form of abortion or a contraceptive. In Ecuador, many people try to undermine efforts to promote reproductive health. In Venezuela because of the economic crisis in 2018 90% of women were left without contraceptives. That led to the biggest form of planning being sterilising. In Chile, there were not many women informed and they needed more information. The ministry did not make an effort to have information accessible to them.