A Z symbol has been seen everywhere in Russia since the start of the invasion of Ukraine. This is a small look at how the ‘Z’ has had a great impact on Russians and how some citizens use it to support their government and military.

What is the Z symbol?

February 24 2022, as the invasion in Russia, began, more military equipment was displayed with the letter ‘Z’ on them and other letters like ‘O’ ‘A’ ‘X’ and ‘V’, each of them meaning something different. But, in the Cyrillic Russian alphabet, there is no letter Z, there is though, a letter that has a certain resemblance to the figure 3, that represents the sound of a ‘z’. The most likely theory used by military experts is that this letter ‘Z’ actually stands for the areas where Russian troops are usually located. It is probable that ‘Z’ stands for ‘Zapad’ (west). Other theories include that the letters were meant to avoid friendly fire, while another theory suggests that the letter Z stands for Ukrainian President Volodymyr Zelensky and that V is for the president of Russia, Vladimir Putin. The Russian defence ministry has not commented on any of these theories, insted it posted on ‘Instagram’ that ‘Z’ stands for za pobedu (for victory) and that ‘V’ stands for “power of truth”. How has this military symbol become a symbol for the war in Russia?

The Kremlin-funded state network RT announced on their social media that they were going to start selling Z merch, including t-shirts, hoodies and more with the hope of supporting Russian troops. Since then various flash mobs (a group of people that randomly assemble that have been organised to perform for a short period of time) with the goal of helping Russian troops and supporting the war. In these flash mobs, young Russians were seen wearing the ‘Z’ merchandise. The Z letter has been seen everywhere in Russia, painted on apartment blocks and posted on the street advertisement signs. In addition, numerous schools have posted some of their students standing in a ‘Z’ formation.

The letter Z has shaken the country so much that the officer’s need to show support towards their country is extreme; they have even committed themselves to include the letter Z in the names of their regions. For example, the head of the Kemerovo region, Sergei Tsivilez announces that he was going to rename the region so that the letter Z can be part of it, it might now be called Kuzbass. It has not only shaken Russia though, Friday 4th Serbs were found waving the Russian flag and wearing the ‘Z’ merch. They marched through Belgrade till the Russian embassy; this is the way for the Serbs to show support for Moscow for invading Ukraine. Saturday 5th, Ivan Kuliak, a Russian gymnast wore the Z insignia when he stood aside from the gold medallist, Ukrainian

Kovtun Illia in the gymnastics World Cup in Doha. 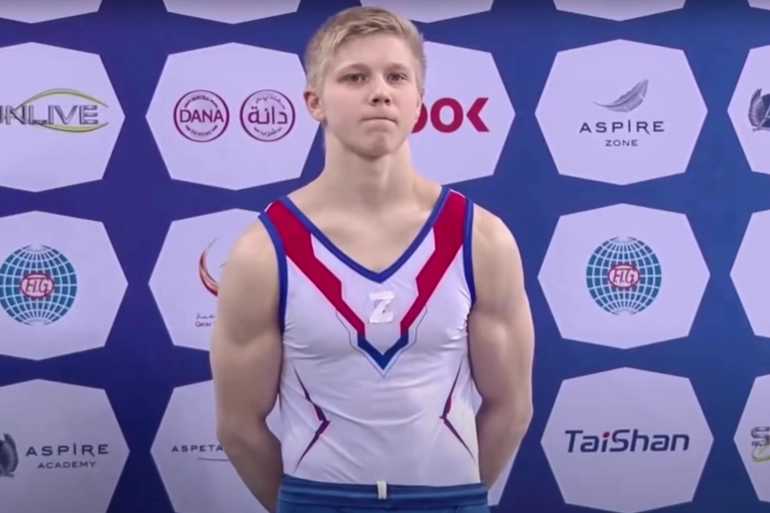 More about Ivan Kuliak and what happened to him

After he stood on the third palace podium wearing the Z letter, showing support for the war, just beside the gold medallist Ukrainian, Illia Kovtun; he was disqualified. It was confirmed that because he wore the Z on his uniform it was accounted as a violation of the uniform approved by The International Gymnast Federation, also known as the FIG. The FIG confirms that a disciplinary procedure against him, by the ‘Gymnastic Ethics Foundation’ will be opened. Monday 14th Head of the Gymnastic Federation of Russia (FSGR), Vasily Titov told Russian Publication MK that Kuliak was the ‘governing body’s full support. This was then quoted on the FAGER’s official website. In my opinion, the act of Ivan Kuliak even though it is a way of supporting the country, and a certain amount of Russians are proud of; it is absolutely disrespectful to Illia Kovtun and to all Ukrainians who are going through a really horrible time.

How has Russian society reacted to the ‘Z situation’.

Even though a lot of Russians have supported the war by ‘wearing the Z’, there are also Russians that have ridiculed the Z.  Countrywide protesters who are against Putin’s invasion, were seen holding signs that said “Zachem” which means: what? Various memes have been posted on the internet criticising the Z. For example there is a meme that shows Harry Potter showing his scar to Ron, but the scar is actually the Z letter. Another example is one where a random car is seen with the Z letter, and two Russians pointing at it. So yes, there are Russians supporting the war, however, there are still Russian citizens that do not agree with the government’s actions. (link to the photo)

Anyhow the letter Z is still spotted on Russian streets, painted in cars, painted in buildings, Russians wearing it and much more. Russians are known for promoting and showing support for the government and military. For example, during ‘the country’s annexation of Crimea’ Russians were seen wearing orange -and -black- striped ribbons of Saint George. These ribbons had and still have great popularity in Russia which shows the support citizens have for the military.  Anyway, the Z has been used intelligently as a way of intimidating anyone who opposes the war. For example, the anti-war NGO memorial said that the Z letter was written on the door of their flat.