I just want you to know how sorry we are

about how f*cked up things got between us

and Mr Wallace. When we entered into this

thing, we only had the best intentions —

As Brett talks, Jules takes out his gun and SHOOTS Roger three

times in the chest, BLOWING him out of his chair.

Oh, I’m sorry. Did that break your

concentration? I didn’t mean to do that.

Please, continue. I believe you were

saying something about “best intentions.”

With over 20 awards and $214 million grossed, being the first “indie” film to surpass $100 million, Quentin Tarantino’s “Pulp Fiction” will leave every single person on their toes.

The anthology of three interconnected stories becomes the new Francis Ford Coppola’s “The Godfather” for the 90s, as John Travolta, Uma Thurman, Samuel L. Jackson and other transcendent, massively important actors play the stories that take place in the contemporary world (1990’s) and extend to no more than two days of crime, hysteria, fear, action and adrenaline.

Pulp Fiction’s opening scene does no less than fully engage the audience as Pumpkin (Tim Roth) and Honey Bunny (Amanda Plummer) unexpectedly threaten the lives of a group of people in a restaurant at daylight when introducing their robbery. Will they succeed to leave the place hands-full without any inconvenience? There’s no immediate continuation as the filmmaker, director, screenwriter, producer and actor Quentin Tarantino is well known for creating films characterized by being nonlinear storylines. The chronology of this film is specifically structured to prevent any major spoilers since it’s understood at the very end of the movie that the end of the film in the middle and vice versa.

Another characteristic of Tarantino’s films is using the same cast over and over again in many of his movies, leading the audience to become familiar with them. The filmmaker himself admits creating a strong bond with his cast and crew from the ground up. Working one on one with every single one of the people has gotten them to fall in love with what they are doing.

“Vincent Vega and Marsellus Wallace’s Wife” is the first story of the film. This story will leave you agape as Vincent (John Travolta), one of his boss Marsellus Wallace’s hitmen, confesses his co-worker, Jules (Samuel L. Jackson), feeling uneasy as the job his boss assigned him was one that could get his life at stake! Taking your boss’ wife out and promising a fun night would sound like a fun plan if only Vincent hadn’t heard one of the scariest stories ever told. He now knew the legend that Marcelus Wallace had sent some of his men to throw off the window a man who had committed the unnameable: massaged his wife’s feet.

The 8 million dollar budget movie touches sensitive subjects such as drugs, rape, overdose, etc. However, I feel like the theme that leads to a deeper reflection for the audience is one that appears in the second story, “The Goldwatch”: dignity. This story is about Butch (Bruce Willis), a professional boxer, who Marsellus Wallace pays a huge amount of money to throw a fight. What is later on informed to Mr Wallace is that Bruce broke the deal, not only winning the fight but accidentally killing his opponent and escaping with his French girlfriend. What I take from this lesson is to “Do what’s right” and let your dignity be the last thing you lose. It’s now your move to watch this movie and figure out if Bruce got what he wanted or got caught on mighty Marsellus Wallace’s web. 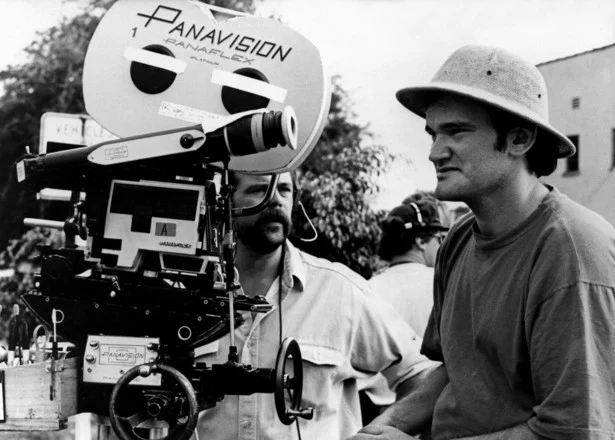 “The Bonnie Situation” fills all empty gaps left. This third story introduces Quentin Tarantino as Jim, a character, and Wolf (Harvey Keitel). Jim is worried his wife will arrive home from work to find spilt blood all over a car in her garage and a dead body. This story ties a few loose threads as the audience is faced with the continuation, or more like what’s prior and parallel to the Pumpkin and Honey Bunny case.

As was the case in Quentin Tarantino’s 2015 film “The Hateful Eight”, the dialogue Tarantino creates is quick-witted and clever. One thing that can be noticed in his films is that his works are incredibly wordy. While this is something that means no good to other filmmakers, for Quentin Tarantino this seems to work very well. This man crafts his dialogue perfectly, managing to keep the audience engrossed and entertained at all times. A very important narrative device used in his movies is called “the pledge”. It is when something a character says at the very start of a scene promises the audience that something great is going to happen. In Pulp Fiction, the opening line of the first scene is a simple “Forget it. It’s too risky.” Personally, this had me on the edge of my seat.

It takes a great mind to create such a movie out of hamburgers, pot bellies, a gold watch, guns, foot massages and lunatics. Each and every single one of the actors proves how the script was sculpted perfectly for their fit, and as the story runs smoothly, it’s not hard to defer good work from excellence. When it comes to cinematography, Pulp Fiction is what can be denominated as a masterpiece.