In the field of science, we often hear the successes of male scientists like Isaac Newton, Albert Einstein, or Stephen Hawking. It is much rarer to know about female scientists who have made groundbreaking discoveries and changed our understanding of the universe. However, there was one female scientist, Marie Curie, who challenged all these stereotypes and was the first woman to ever win a Nobel Prize, and the first person (man or woman) to ever win two Nobel Prizes.

The story of Maria Sklodowska, who later became known as Marie Curie, started in Warsaw, Poland, where she was born on the 7th of November 1867. She had four siblings called Zosia, Jósef, Bronya, Hela, and she was the youngest of the five. Marie Curie’s parents were both teachers. Wladyslaw, her father, was a math and physics professor. However, when Curie was only ten, she sadly lost her mother, Bronislawa, to tuberculosis.

When she was young, Marie Curie resembled her father in several aspects. She was characterized by a very curious and bright mentality, which naturally made her excel at school. Despite this, and being the top student in her secondary school, Marie Curie could not attend the University of Warsaw, as the sexist society of the time meant it was male-only. However, Curie was not going to be stopped from getting the education she wanted and enrolled in Warsaw’s “Floating University”, which held secret, informal classes underground late at night.

Marie Curie and her sister Bronya had the dream that one day they could study abroad and earn an official degree, because at the time they did not have the financial resources needed to be able to do so. Thus, they made a pact that Curie would work to support her sister while she was still in school. Then, once Bronya finished studying she would do the same for Marie. Hence, for five years Curie worked as a governess and tutor, whilst using her free time to study her favorite things: physics, chemistry, and maths.

Finally, in 1898, Marie Curie studied at the Sorbonne in Paris. However, by investing much in her studies, she had to sacrifice her health as she had to survive on a poor diet. After her constant perseverance, Curie got her master’s degree in physics in 1893 and then earned another one in mathematics the next year.

When she had been studying at the Sorbonne University, Marie was introduced to Pierre Curie by one of her colleagues, and they were lab partners for a study on different types of steel and their magnetic properties. They fell in love with one another and became a brilliant scientific duo. On July 26 of 1895, they married. Two years later they had their first daughter, Irène. Then in 1904, they welcomed their second daughter, Ève. When Irène became an adult she would follow her mother’s footsteps.

During their first years together, both of them worked on different projects. Marie had always been fascinated by the work of French physicist Henri Becquerel, who had discovered that uranium casts off rays weaker than X-rays. She decided to continue his investigations by conducting experiments on uranium rays. She discovered that the rays remained constant, no matter what was the form or condition of the uranium. Therefore, she concluded that the rays came from the element’s atomic structure. This avant-garde idea created the field of atomic physics, and Marie Curie invented the word “radioactivity” to denote uranium’s phenomenon.

After this ground-breaking discovery, Pierre decided to stop his work to help Marie continue her research. They used the mineral pitchblende to discover another radioactive element in 1898. They decided to name it polonium after Marie’s native country Poland.  The pair also detected the presence of another radioactive material in the pitchblende and named it radium. In the year 1902, the Curies reported they had produced a decigram of pure radium, proving that it was a unique chemical element.

For this work on radioactivity, in 1903 Curie became the first woman to ever receive a Nobel Prize. She received this price in Physics along with Pierre Curie and their colleague Henri Becquerel. This success gave the Curies an international reputation, and they used the money awarded to continue their research.

However, in 1906 tragedy hit the Curies. Pierre was accidentally killed in Paris by stepping in front of a horse-drawn wagon. This was a tremendous loss for Marie Curie, who decided to take over Pierre’s teaching post at the Sorbonne and became the first female teacher of the university. Five years later, in 1911 Curie would start dating Pierre’s former student, Paul Langevin.

In 1911, Marie Curie was also awarded her second Nobel Prize and became the first person to ever win two Nobels. This one was in the field of Chemistry due to her discovery of radium and polonium. Marie Curie remains the only person to have been honored with Nobels in two different sciences. In her acceptance lecture, Curie explained that even though she received the prize alone, it was an honor she shared with her late husband.

Furthermore, around this time, Curie attended the first Solvay Congress in Physics to discuss the new revolutionary discoveries of the field. She was joined by other renowned scientists like Albert Einstein and Max Planck.

When World War I started in 1914, Curie was determined to use her time and resources to help the cause. She mastered the use of portable X-ray machines so that wounded soldiers could get X-rays during the war. These medical vehicles were nicknamed “Little Curies”. Once the war ended, Curie devoted her time to advance her research. She traveled twice to the United States (in 1921 and 1929) to raise funds so that she could buy radium and establish a research institute in Warsaw dedicated to this chemical element. 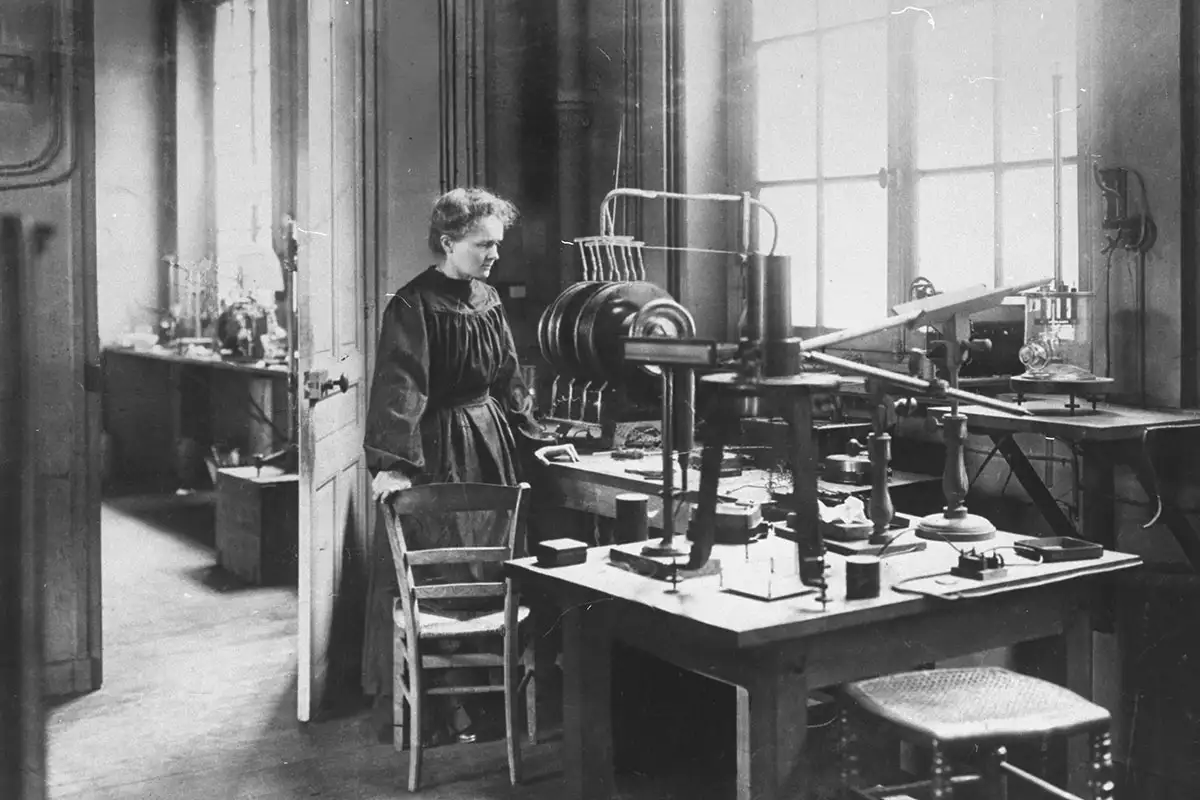 Marie Curie died on the 4th of July 1934 of aplastic anemia, which she had developed due to her high exposure to radiation throughout her life. At that time, it was not yet known of the dangers of radioactivity to human health, and Marie Curie was known to carry test tubes of radium in the pocket of her lab coat!

An interesting fact is that even more than 100 years after her death, all of Curie’s personal belongings like her clothes, furniture, manuscripts, etc, are still radioactive. Her laboratory notes are national and scientific treasures kept at France’s Bibliothèque National in Paris, inside lead-lined boxes. Visitors can contemplate Curie’s notes, but they have to use protective gear as they could be in danger by radiation from radium 226, which will continue to be reactive for another 1600 years. Even Curie’s body was radioactive and had to be placed in a lead-lined coffin at France’s Panthéon. She became one of the five women buried at this mausoleum meant for acclaimed French citizens with France’s greatest minds. Nowadays, several educational and research facilities bear the Curie name in her.

Curie will always be remembered as a role model for women, especially for female scientists. She is an example of how even when life presents challenges, determination and perseverance can keep your dreams alive.